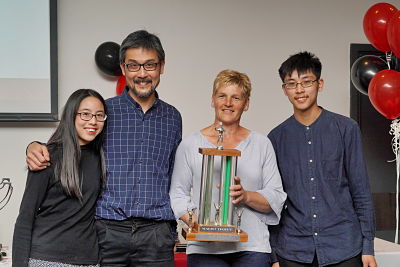 At our Annual Awards on Saturday 2ndNovember, the winners were announced for the Christchurch Winter Interclub Best Performing Male and Female Teams and Club. The stage was stolen, by Rangiora Squash Club who won all three titles. Rangiora have performed incredibly well during the Winter competition in both Men’s and Women’s divisions, which included three of their teams being announced as finalist for Best Performing Team.

The winners were calculated using an incrediable detailed and complicated assessment system, which was created by current board members and statistician, Paul Monk.

This year, in the Men’s competition it was very very close with only a 0.05% splitting 1st and 2nd place. Results;