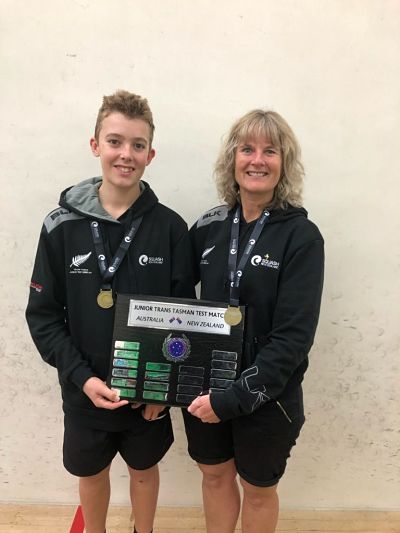 On the 12th April, NZ won the second and final Test of the Executive Travel Junior Squash trans-Tasman series at the Remuera Rackets Club in Auckland. It’s the fifth series win in a row for the New Zealand team.

Congratulations to Tom Marshall and Nic Dann, from Marlborough, who were part of the winning NZ team.

‘What an awesome privilege to manage the Nz Trans-Tasman team this year in Auckland as they comprehensively beat Australia. The Australian side produce some remarkable players who will become phenomenal athletes to be watched in the future. However, the continued depth of a strong NZ side particularly at an Under 15 level is credit to the clubs that have nurtured these players as well as structured development programmed at a District level. Everyone plays a part in supporting our juniors and this team approach makes a huge difference to producing high performance players.

Tom Marshall played two strong matches in the Under 15 age group but was outclassed in the first, and played a smart, tactical game for his second encounter. Full credit to Tom’s dedication to the game and his training by coach, Paul Roughan, as Tom was disciplined and focused on court.

Thank you Squash NZ for helping to develop our game and taking our young athletes all the way to the top...’ Nic Dann