The Canterbury Open was hosted by Burnside Squash club this year and was a great affair, with nearly all of Canterbury’s top players converging on the scene. Five days of scintillating squash were wrapped up by some high intensity play-offs finishing Sunday last week. Whilst the majority of the games were played at Burnside, the sheer number of entries at 160 people (122 men, 30 women, and 8 juniors) meant that Hoon Hay and Squashways got the tap on the shoulder to help with the overflow.

Special mention needs to be made regarding the volume of out-of-town players, whose dedication and love for the game helped us reach the record number of entries. We had people arriving from all over Oceania with special mention to ex-Canterbury resident Stefan Stanford who travelled from Australia. There were several entries from the North Island, and of notable mentions are the crews from Marlborough, Midlands and the West Coast who boasted numbers significantly.

Big congratulations to the Men’s and Women’s Open winners, Oliver Johnston and Emma Cormack, who defended their titles in dominating style.

Johnston, who was in doubt over entering due to injury, played courageously to retain the trophy. He did drop a set apiece during his semi and final to catch a breather but, as we all know, Darth Vader was never well known for being good at the breathing side of things. Johnston overcame Auckland’s Sam Sayes in the final, and it was great to have a North Islander of his quality coming down for the tournament (if you’re reading this Sam, you’re more than welcome to come down again!). Sayes progressed to the final though the semi-final default of a despondent Adam Odering who, unfortunately for everyone, managed to terminated himself by injuring his calf during his quarter final victory. In the final Sayes looked to use his fitness against Johnston, which seemed the right move. However Ollie can’t be undone that easily and was able to lift his game, hitting the ball with venom and utter accuracy, which saw him cruise to a comfortable looking four set victory. Third place went to Joe Williams, leaving a gutted Odering out of the medal placing’s and onto the injury table instead.

Cormack didn’t feel the need to drop a set in her title defence as she used the tournament as preparation for the Nationals this weekend, beating Greymouth’s Erin Ellery in three. There was a sense of confidence about Cormack, winning all four of her matches in three sets to comfortably lift the trophy. The biggest battle of the Women’s Open was undoubtedly Ellery’s tough 5 setter against the ever improving Grace Hymers in the semi’s. You could see by the look on Ellery’s face that she was glad to get past the hard hitting Hymers, who secured third place with a victory over Timaru’s Lily Rae. 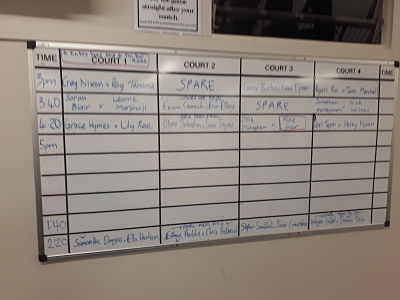 Overall, the weekend belonged to Cormack and Johnston. Defending a title of such stature is never easy, but neither of them looked in doubt of doing so. Congratulations to the both of them.

The interest in this year’s Canterbury Open was brilliant to see, with entries set to increase even more for next year, with the continued growth of squash throughout the region and the opening of Christchurch’s 8 court facility not far around the corner.

If you didn’t make it to the 2019 Canterbury Open you missed out on some fantastic matches and everyone enjoying themselves throughout the week, whether they were on court, spectating, or catching up with fellow players. The bar and kitchen did a roaring trade, and rumour has it that this was helped by a certain FITZ owner’s relentless chat and heckling from the lounge.

Thanks to everyone who played in the tournament, please don’t forget to fill out the quality survey, to help us deliver an even better Canterbury Open for 2020.

Squash Canterbury would like to say a BIG thank you, to the Burnside Squash Club, its committee and members for hosting this prestigious event on behalf of Squash Canterbury and for doing a great job.  A massive thank you to Ben Wilkinson, Tournament Controller, and all the club members who volunteered their time to ensure the event ran smoothly.

Final placing’s for the tournament are as follows: