Congratulations to Christchurch Football (Men’s B Grade) and Kaikoura (Men’s C Grade) for winning their Canterbury Championships last weekend. They will join Greymouth (Men’s D Grade) and Takaka (Men’s E Grade) at the Nationals, the 25-28 September; 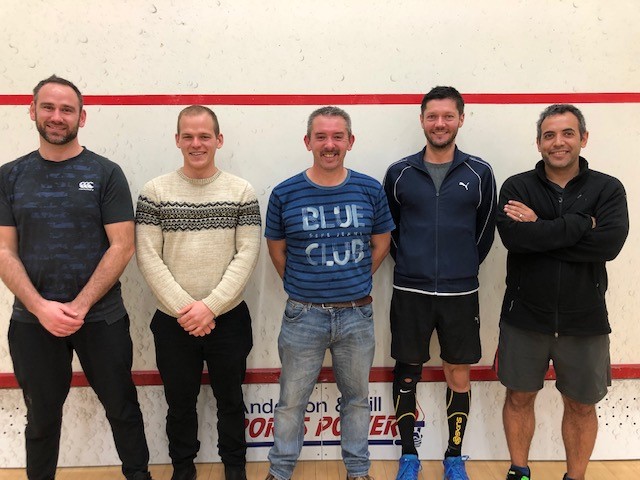 On Friday evening the Marlborough Squash Rackets Club and Marlborough College Old Boys squared up in the first match. The games were played in a competitive manner with some memorable matchups including, three five set matches. Young Chris Hebberd showed his glass against the old war horse Warren Le Seuer (Wazza), with Chris winning in four sets.  A decent gallery watched the Friday night games with both clubs receiving great support which added to the atmosphere. At the end of the tie the match score was 3-2 to the Marlborough Squash Rackets Club.  It was good to see both club enjoying a yarn over a drink at the end of the tie which confirmed the good spirit of the that the matches were played in. The talk that night between the teams, was what the Kaikoura team was going bring to the table the following morning.

After the matches ended all three teams enjoyed a drink and a yarn reminiscing.

Squash NZ have recently tightened up the rules. They have aligned the eligibility rules with Cousins Shield/Mitchell Cup. There is a rule that states the District or Squash NZ may apply dispensation to a player. This will mean that if your club can’t make a team without asking players from other clubs to join you can apply a dispensation. This will mean smaller clubs can still join together if need.

Squash Canterbury would like to see a greater participation of teams at the District SuperChamps and are aware for a majority of the smaller clubs this is simply not possible with the number of players they may have at a particular grade. Smaller clubs will have the ability to utilise players from their neighbouring club to allow the composition of graded teams.

This model is not to allow clubs to 'stack' teams, but to provide an oppotunity for clubs and players to work together so they can particpate at these teams events.

Rules that will still apply under the club composite model;

For example Rangiora might have only 4 players able to play and Oxford and Amberley do not have enough players to put in a team. Then they can apply for dispensationfor the 2 Oxford players and the 1 Amberely player to play for Rangiora.

However, if Rangiora has 7 playerrs that are willing, but they just want stronger people from the other clubs this would not be allowed. So, clubs must undertake the due diligence to make sure a club isn't leaving anyone out that normally represents their club.

b)    Be on that club’s grading list on 14th June (NB: this means any transfers need to be effected on 13June or earlier – contact your District for deadlines); and

c)    Live in the same district as that club;

i)          A player that lives in multiple districts concurrently, and therefore meets the eligibility criteria for multiple clubs, may decide which of these clubs he/she plays for. They must appear on the 14th June Grading List for the club they wish to play for.

ii)    NZ Players returning from overseas to take part in the competition must have been active club members for the club they wish to represent prior to departure overseas and must fulfil all other eligibility criteria i.e. full financial membership and appearing on clubs grading list.

i)     Where a woman entering SuperChamps plays men’s interclub, her men’s