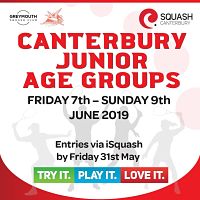 Greymouth attracted credible entries for the 2019 Canterbury Junior Age Groups Tournament, no doubt helped by their excellent track record of event organisation and hospitality. Of 33 players, 10 were West Coast origin, 3 from Marlborough and the balance from Christchurch. There was a notable turnout of six CBHS boys.

The only upset on the first day was unseeded Sasha Ellery proving herself in winning the U13 girls Championships with two 3/1 wins. Her sister Casey Ellery was dominant in winning the U11 Championship, making it a good day for the Ellery family trophy cabinet. Caelum Betteridge also dominant winning the boys U19 final 3/0, with the other five draws to be completed on Sunday.

The U15 boy’s final was of excellent quality, with both boys proving equally adept in virtually every aspect of the game. The first two long games had many long and aggressive and demanding rallies. The final result was due to the winner holding form and discipline during the final two games, with Ryan proving too adventurous in producing a number of tin errors. Final score Tom Marshall (MS) 15/17, 15/12, 15/5, 15/6

The U17 girl’s final was hotly contested with Ella Knutson to her credit giving no quarter to her much favoured opponent. She demonstrated superior athleticism and determination as demonstrated in the final rally where she ended on the floor in completing a desperate retrieve, despite the score line of 6/14. A performance Ella deserves to be proud of. However it was clearly Leonie’s day carrying the victory based on superior court craft, strategy and ball control. Final score 15/7, 13/15, 15/8, 15/7.

The U17 boy’s final was a battle of contrasting styles. Scott demonstrated greater vigour and willingness for adventure with the occasional point of undoubted brilliance, whereas Nathan had a more workman like demeanour, clearly well focused, more conventional and patient. Early in the match it seemed that Scott had the better of it starting well 16/14, 15/7. However Nathan was not finished and took advantage of a slight lull on Scott’s part to take the third game 15/8. It was anyone’s game from 12/12 in the fourth set but Nathan proved ultimately stronger winning that 15/13. The turtle and hare parable would be unfair to Nathan’s court coverage but provides a fitting summary of the overall match with Nathan dominating the fifth set 15/3 to win the U17 boys Championship.

The overall share of titles is a distinct credit to Greymouth with four West Coast titles, three from Christchurch and two to Marlborough.

Squash Canterbury would like to say a massive thank you to Brendan Giles, the Tournament Director and the Greymouth Squash Club and committee members for doing an amazing job in hosting the tournament. We would also like to thank Tim Preston for the awesome write up and Jo Clark and Paul Growcott for their help behind the scenes. 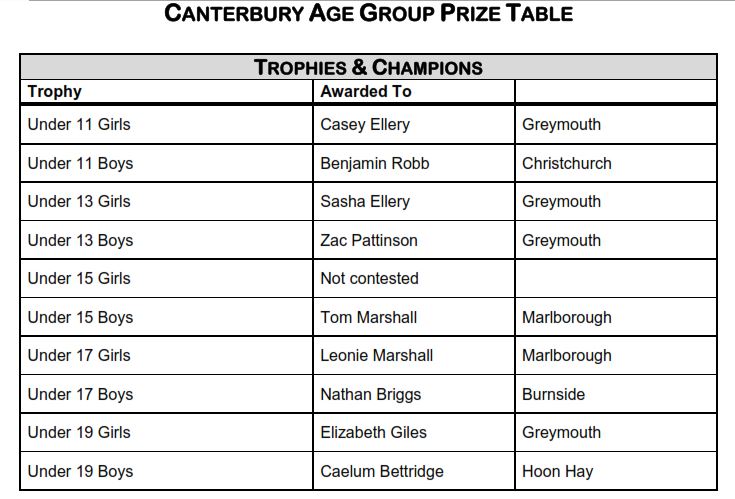