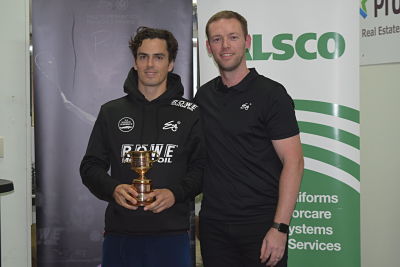 Nick Wilson had the toughest draw with only 3 ranked below him in the top 32 draw. After losing first round to 4th seed Luke Jones, he made his way to the plate quarter finals eventually losing to eventual plate winner Anthony Lepper in 5 sets

Quinn Udy faced a tough opening round 14th seeded Sion Wiggin and lost in 4 sets. Quinn made his way through a tough Plate quarter final v 22nd seeded Elijah Thomas before going down to Joe Williams also from Canterbury region in 4 sets.

Joe Williams also had a tricky slippery wall opening encounter versus one the progeny of the great Susan Devoy - Jamie Oakley – with Jamie eventually prevailing in 5 sets in a tough 13/11 5th set.  From there Joe progressed past 3 more opponents including Quinn above before succumbing to Anthony Lepper in the final of the plate finishing one spot ahead of his 18th seeding.

Jackson Beresford easily made his way into the last 16 by winning his first round in 3 sets before he was stopped in his tracks by 7th seed Matthew Lucente in a tough 4 setter.  He went on to secure great wins against Jamie Oakley (15), and a cracking 5 set win over 6th seed Zac Millar and was only halted by the legendary Kashif Shuja 18/16 in the 5th set of the Special Plate final to hold his 10th place seeding.

After cruising through the first round, Oliver Johnson found his second-round progress halted by up and coming 17yr old Gabe Yam who would eventually get all the way to the semi-finals. Oliver then got a free pass in the first round of the special plate with his opponent defaulting before losing in a tough 5 sets to Kashif Suja who would go on to win the 9th spot.

Lastly comes Paul Coll who had high hopes of another NZ title.  He was not to be denied and did not drop a set on his way through the entire draw.  Fantastic result and one that we here in Canterbury and no doubt the fans across in Greymouth are immensely proud of.

Well done to all the players who represented the Mainland up at Henderson Squash club for the 2018 EYE Rackets NZ Senior Nationals.  We look forward with interest later in August to the travelling men’s and women’s teams, as they compete at the Inter District Senior Teams event in Auckland.