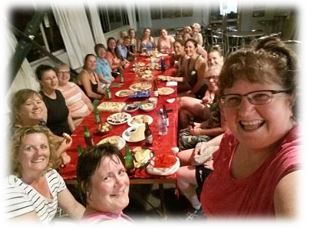 It sounds like it was an awesome night, with some great games; five 5-setters, two 4-setters.

A big shout out and massive thanks to Nan Patrick from Linwood Squash Club for providing the Christmas spirit with the red table cloths and a Christmas tree. She also went the extra mile by, presenting everyone with "Certificate of Achievement’s” for something they had done whether it was funny, good squash, most improved etc.  Some of the certificates ranged from Most Improved, Best Supporter, Longest Match, Biggest Smile, Loudest Laugh, Energiser Bunny etc.

It sounds and looks like they all had an amazing time, with a great lot of laughter and smiles.  Everyone at the end of the night went home with full belly’s and clutching their certificates proud as punch!

The Women’s Combined league was set up to make games more enjoyable for the players. We mixed up the teams, with the aim of making their games closer and hosted the games at central venues to create a fun and enjoyable atmosphere. It’s fantastic to see that the league has been a huge success and we are looking forward to rolling it out again after Christmas.

Thank you to all those who have helped behind the scenes in making the league such a success, a special shout out to the captains and Jess Wilson - it couldn’t have happened without you guys!