It’s often an overused Term but “Oh My God” we had another “Count back!”  But more about that later…

This year’s Junior Nationals was held at the Burnside and Squash HQ (Hoon Hay) Clubs and what an enormous task with unprecedented numbers turning up to play and the quality and sheer enthusiasm of the players and entourages were plain to see!

We as Canterbury were up against it with our girls’ team ranked 5th and our boys at the bottom of the table but this by no means curbed our enthusiasm or determination to do well.

The Individuals showed our wealth of talent with a number of players from Canterbury well distributed among all the age groups and coming from all parts of our region, I cannot stress how important and amazing this is as we all know our Region has been devastated with Earthquakes causing disruptions to Clubs, resources and logistics our northern districts (Tasman, Marlborough and Kaikoura) enduring long travel times and difficulty in arranging the resources needed to attend not just this tournament but others around our country. We appreciate and acknowledge the effort you guys put in!

It was also great to see Midlands and Southland putting up competitive teams. And with their local strength gaining some momentum this will carry on to Seniors! Go the South Island!

Although we didn’t come away with any titles we had some tremendous performances from our young players Matt Growcott, Zac Pattinson and Victoria Moran in the under 11’s. 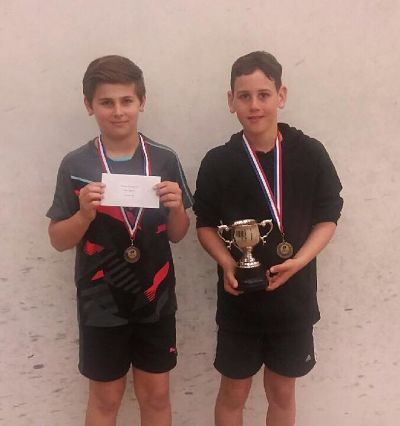 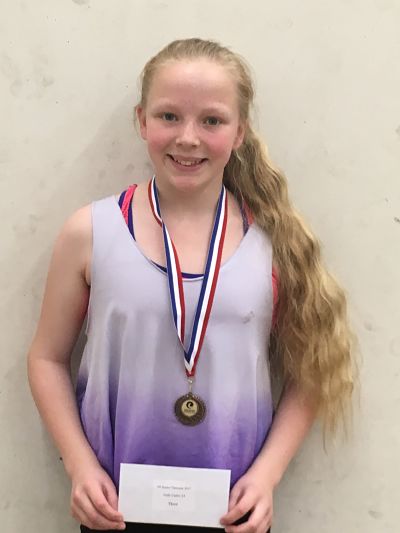 The Under 15’s for both Boys and Girls was extremely competitive but we had some notable performances from Nathan Briggs, Scott Butterick and Leonie Marshall.

Our under 17’s was no easier, but we certainly showed the potential and fighting spirit we have in this district with some good performances from Caelum Betteridge, Henry Aiken and Grace Allen.

Our under 19’s was tough as well and the draw showed true talent with some of the best consistent talent around New Zealand at the moment and our boys Quinn Uddy and Matthias Paltridge showed great fortitude and battled hard. The girls were also up against it with Emma Cormack, Ruby Turnbull and Kiriana Andrews only falling to the top seeds with hard fought matches and with a quirk of the draws ended up playing each other for holding their seeding’s. Tremendous efforts from ALL.

The Teams event was no less arduous with the Boys Team of Caelum Betteridge Henry Aiken William Quinn Paul Moran and Matthias Paltridge, to put it into perspective our Boys team went in with our highest player being a B2 in contrast the top teams were fielding A1’s so our level had dropped off since last year, but believe me this is only temporary!

Our real crunch match was against Midlands and this proved to be the battle that was expected, Will Quinn was first on and although gave his best was just a little lose and lost to an accurate Thomas Pickles, then up came a fired-up Paul Moran who played a true spirited match chasing every ball down and coming away with a deserved win against Connor Bolitho. Our number ones were on next and Caelum was up against a very determined Kedah Bungard, this match was a true game of who got in front dominated both players driving and volleying for position with Caelum coming out the victor with his dominance at the front. The matches now poised with all the pressure falling onto a young Henry Aiken, the pressure showed on both players and the points see sawed with both making those vital errors at key points, but we all know those games where you just can’t get that one or two points in front and that happened to Henry losing the match to Mason Smales but every game going to the two-point margin!

The Boys finished at the bottom but their reputation as fighters has already begun and we have a young Team with huge potential.

At this stage I must personally give a huge thankyou to Richard Aiken, Richard covered the majority of the boy’s team event and was a rock for the team and a calming influence on me and the Team, Thank you Richard… 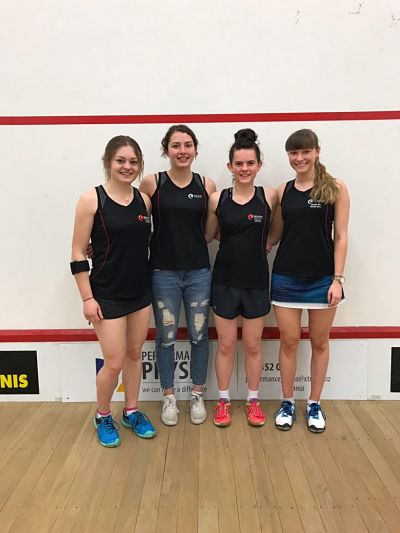 Our first Match was to be our defining one as being 5th seeds we were up against Eastern 4th seeds, Kiriana was to lead the Team and show us All how it was done, Kiri showed a relaxed controlled exterior but inside she has a determination that belies her look! Her clean hitting and spot on length took us to a win. Up next was Amelia and she was nervous, not able to play the individuals the hot cauldron of competition was a surprise and Amelia admitted it was tough and her best was yet to come! Up next was Emma taking on a young Winona-Jo Joyce this turned into a huge battle with both players fighting for every point, Emma’s tenacity won out with a great win in 5 games. The match delicately poised slightly in our favour with a two to one lead up stepped Ruby against a very determined Rhiarne Taiapa the match was fierce with both players going for their shots and the rallies were short and fast! Unfortunately, Rhiarne fell to a very painful ruptured Achilles and as squashies we all felt her injury and we wish her a speedy recovery…This WIN put us in contention for 3rd and 4th playoff a fantastic result for the girls and Canterbury (Again keeping a Canterbury team up in the top 4 of NZ nationals).

The next three round robin matches were chalk and cheese with the girls playing well against Southland and Shalee Harris having a good match. Playing Central was extremely tough with Kaitlyn Watts and Team heading a very strong line-up, Ruby showed her capability with a tremendous match against Courtney Trail. And Wellington was not able to field a strong team due to an injury to Charlotte Galloway.

This brought on our match against Northland (playoff for 3rd). This was to be a battle to the last and showed the true meaning of a Teams event and how it is a “last woman standing” competition! Kiriana started with an inspiring win against Iyra Stewart showing her fighting spirit, then Amelia’s “A” game came out against Annemarie Holst and was match that enthralled with both girls hitting superb length winners, unfortunately Amelia losing 11/9 in the fifth, then Emma came out to play a fit looking Zoe Dykzeul the score did not reflect the sheer guts and determination from Emma, agreed she was spent but absolutely fought to the last! This brought on our last chance Ruby was aware of what she had to do WIN! And standing in her way was a strong looking Mckenzie Johnson, the match was fast with both girls manoeuvring each other around the court, length and then short but Ruby’s boast game was on form and she won the match in 4…Now remember the “Count Back” situation,  yeah we finished up at 8 games all and went to points which we lost 140 – 142 “Oh My God” J You may say that’s what happens in these situations close matches etc but it has happened to us ALL year with Senior Nationals being pulled out of a hat as we were all squared up against Wellington and SIAG where we participated with a shortage of Teams but still went back to a count back on games and points! I guess my Brownie point is never give up, every point counts…

My last points are Thank you to Sue and her team at Burnside and Growcott you’re a flippin “Legend’ and Anthony Liken you’re a silent star!

All the Best Coach Brownie