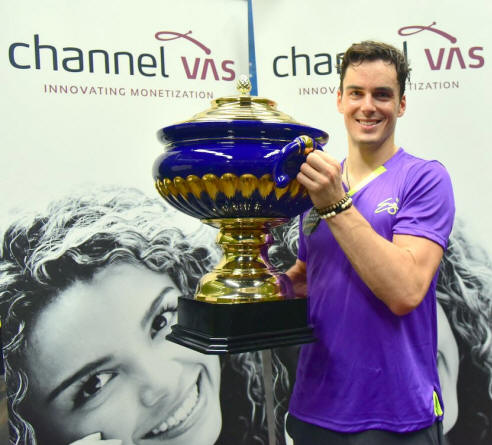 Coll started the week out in the qualifying rounds where he took down Finland's Henrik Mustonen and Lucas Serme of France in comfortable 3 setters.

Next up Coll took on Colombian Miguel Angel Rodriguez. Rodriguez boasts a World Ranking of 13 and Coll was out to take his second top 20 win of the event. These two players battled it out on court in what can only be described as an encounter of mammoth proportions with Coll sealing the win in 5 (9-11, 11-9, 6-11, 11-6, 11-6 ) spending 102 minutes on court with the Colombian.

In the Semi-Final Coll took on World Ranked #16 Daryl Selby who after his shock first round against top seed Mohamed ElShorbagy was set to make his way to the final. Coll looked to promptly put a stop to this and took care of Selby in 4 (11-6, 11-7, 4-11, 11-5) and spent the least amount of time on court all tournament winning in 59 minutes.

The final would see Coll take on World Ranked #11 Tarek Momen where in their last encounter in Qatar Momen claimed the win in an epic 5 setter. Coll having spent over 340 minutes on court this week and having had to reschedule his flight home was out to take the win today. Coll had a strong performance in the first game but Momen came out firing in the second and looked set to level the game score but a calm performance from Coll saw him fight back to level the score and claim the second game. Momen had several unforced errors in the third which Coll capitalized on and he stormed out to a strong lead, Momen looked set to fight back but it was not meant to be with Coll sealing the third and claiming the title in 56 minutes 11-7 13-11 11-4.

This event tops off a stellar year for Coll having claimed two medals at the World Doubles Championships (Gold in the mixed and Bronze in the Men's), his second New Zealand National Title and 3 PSA titles in the New Zealand PSA series in June. This win is likely to see Coll catapult himself into the low 20's in the World Rankings. Congratulations Paul.