This year Paul has contributed endless hours of his time at club, district and National levels. His dedication, commitment and contribution has been exceptional and ongoing for over 30 years. In recognition of this, Squash Canterbury awarded him a life membership this year.

Paul’s love of squash on and off the court has made him passionate and very dedicated to the various roles and tasks he takes on.

He also has great respect from clubs, administrators, players and parents for his professionalism and hands-on approach. His biggest strength is bringing these people together to work as a group in order to achieve success.

Paul has played many pivotal roles this year and achieved a significant amount of success for Squash.

This year Squash Canterbury had to rely on more volunteers, and Paul offered to take on the roles of Junior Convener and Selector. This was an instant success with changes he made regarding selection criteria resulting in the Junior Age teams winning 7 of the 8 gold medals available at the South Island team’s event.

The role of Junior Conveyor included many tasks, such as;

-          Linking between Squash Canterbury, Board and selectors.

-          Compiling the junior ranking lists and communicating to Squash Canterbury.

Paul did an extremely good job this year. He has made things happen and created an abundance of positive energy whilst doing it; which is fantastic for the future of junior squash.

v  Tournament Director for the Burnside $US 10,000 PSA International Tournament, securing over $30,000 to make this happen.

v  Secretary and Treasurer for the New Zealand Secondary Schools

v  Paul is always giving players and clubs advice on a number of issues including funding, sponsorship, tournaments and even showing clubs how to repair and paint courts.

For all his hard work and commitment, we feel Paul has made such a positive impact for Squash this year and he is a worthy candidate for the National Volunteer of the year 2016. 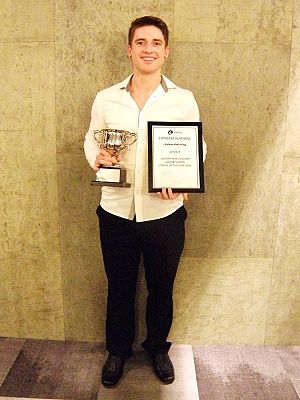 Adam's coaching has played such a fundamental role in developing Squash at Christchurch Football Squash Club; increasing and retaining members and achieving some outstanding results.

Adam has a Degree in Sport Coaching (BSpC) and is planning on running the Squash NZ Coaching Modules next year 2017, and has been in communication with Sam Crawford and Luke Morris from Squash NZ.  He attended a coach development workshop a few months ago with Sport Canterbury to accommodate this.

v  The Junior Squads program reached 50+ consistently throughout the year

v  Approx. twenty hours/week coaching, at all levels and ages, varied programs for individuals and squads

Adam has initiated many great new focused training plans which have in turn given the club some outstanding results in local and National tournaments.

Adam has been involved in coaching players to titles in Canterbury Age Groups, and most notably the coaching of Jayden Millard, Charlie Barker who have reached A Grade and Emma Cormack now a high B1.

Adam also coaches Emma Cormack who was runner up in the Canterbury Open taking Nikki to 5 games and only narrowly losing.  Emma also won Canterbury Under 23 women’s title.

Adam is continually improving and changing the club junior squad system to make his programs even better and more exciting for the juniors, they all look to be having fun and love coming down for their time with Adam. In the last few months we have seen an increase of ten-year-old boys coming to his training squads as they have been encouraging their friends to also join the training squads.

The junior squads have seen an increase this year from 40 – 47 pupils, 17.5%. Next Year, Christchurch Football will be changing the format of the juniors so they can allow for more juniors.

Adam is happy to work with other coaches on the development of any juniors in the Canterbury Development Squads. Most noticeable and pleasing results here are the increase in juniors becoming involved with squash at the District Level. Jayden Millard represented Canterbury at both the Senior and Junior Nationals, the senior team won. Charlie Barker, William Quinn, Ruby Turnbull and Emma Cormack represented Canterbury at the Junior Nationals, the boys team where runners up and the girls finished fifth.

On and off the court Adam is respected, befriended, idolised, and is an outstanding mentor to the juniors especially.

Adam has a huge influence in the club juniors in their court manner and is teaching them life skills that will be valuable in all sports and work in years to come.  The club always get positive feedback on our junior’s court manners at interclub, tournaments and if they travel outside the Canterbury area.  This is part of Adams coaching influence.

Another noticeable change in the club since Adam has been our club coach is that we are not losing the juniors when they get to High School age, this has meant we are building up the number of juniors in the 13 – 23 years’ age group which is giving us a fresh, vibrate atmosphere around the club which then encourages other players of that ages to stay or start playing.  All from having a young enthusiastic club coach that has good junior programs that make squash fun as well as brings on their skills very quickly.

Paul Coll - Personality of the Year and Charirman's Award (as a member of the World Doubles Team), Squashways Canterbury 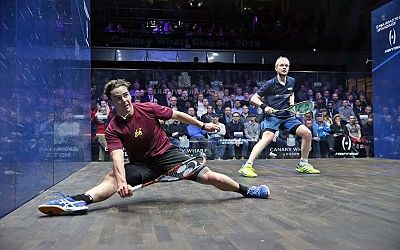 2016 has been another stellar year for Paul Coll. The 24-year old has continued his development on the international stage where he remains in the top 35 world rankings. As well as claiming two gold medals at the WSF World Doubles Teams event, Paul's 'out-of-this-world' rally against James Willstrop also went viral earlier this year, where he executed back-to-back full length superman dives to keep the ball in play and win the point after almost doing the splits while stretching for another ball.