It was the last week of Winter Interclub and there was still plenty on the line for people to be playing for with two teams on 60 points each. With Christchurch 2 and Football 1 some sort of upset needed to occur for either team to be the clear winner. Christchurch 1 were able to put out a strong team for this final match to try take down Football 1 whereas Burnside unfortunately lacked Scott Gardiner after he rolled his ankle last weekend.

Without Scott Gardiner, Burnside 1 were at quite a disadvantage as Christchurch 2 were keen to notch up 11 points regardless. Matt Smith and Brandon Mchaffie were first on the court and with Mario having found a new lease of form at this late stage of the season, he was able to work the ball into all 4 corners with ease as Mchaffie struggled with the extra pressure, ensuring a 3-0 victory to Mario. When Budge and Williams took to the court it seemed Budge was keen to make up for the loss of Gardiner as he stormed away with the first set. It took Williams long enough to find his range as he was looking down the barrel of a 2-set deficit. Fortunately, everything started to click he managed to win the next 3 thanks to some fine touch and a few additional errors from Budge. Last up was Briggs and Gardner and Gardner was keen to impress after his slip up last week. He took the first two set quickly, but the pressure Briggs was applying through accurate length and pin-point drops showed as Briggs took the third. Unfortunately for Briggs he couldn’t sustain his game as loose boast creep into his game more often meaning Gardner could take the ascendancy and win in 4.

Football 1 needed to perform tonight as they faced a strong Christchurch 1 team. Graeme Dill-Russell took on Jason Cumpstone first up and whilst there was a reasonable difference in the players’ points Dill-Russell still came out giving it his all as he took the first. The match looked like it was going to be a marathon as the rallies were lengthy. At 5-5 in the second however Cumpstone found an extra gear as Dill-Russell hit the wall and Cumpstone ran away with the match to win in 4. Thomas Jordaan and Tim Preston was marked to be the big match of the night and it didn’t disappoint. With both players being known as shot players and in good touch, the crowd was in for a treat. A number of balls rolled out of the nick during the match but the match reached its peak at 10-10 in the fourth as Jordaan, a man not willing to lose started putting his body on the line to get the ball back but each time he won a point Preston would find a nick the very next rally. At 14-13 up, Jordaan managed to win the riveting set 15-13 and the match. Adam Odering needed to get on court and win for his team and did just that against Jason Oxenham. The first set was one-sided to Adam but Oxenham came out strong in the second set to win it. Just as Oxenham thought he had a fighting chance Odering showed why he’s been one of Canterbury’s top player this year, as he stormed away with the win.

These results left an unusual predicament as both Football 1 and Christchurch 2 had 71 points, so the consensus was to have squash’s shot out equivalent and have a nick off. First team to hit two nicks wins. What occurred next was something that you would’ve had to see to believe as even now it’s hard to believe it actually happened. It was Williams and Odering up first and both decided to go for the forehand cross court nick off the bounce and both .... missed. Next was Smith and Jordaan, Smith went for the same approach and managed to get the ball rolling (if you pardon the pun), slotting it. The pressure was on Jordaan as he opted to go for the volley forehand cross court nick and just as pressure makes diamonds, Jordaan hit the nick. Lastly was Gardner and Cumpstone, Gardner opted for the backhand crosscourt drop and clipped the top of the tin thus Cumpstone needed to hit the nick to win it for his team, opting for the forehand crosscourt nick which he .... slotted! Cumpstone was ecstatic as Football 1 took home the Christchurch Winter Interclub Open Grade trophy for 2019.

Well that’s it for me for 2019, it’s been a great year of squash and rightly so Football 1 the form team of the season manage to take home the Winter title. Til next year, Adios! 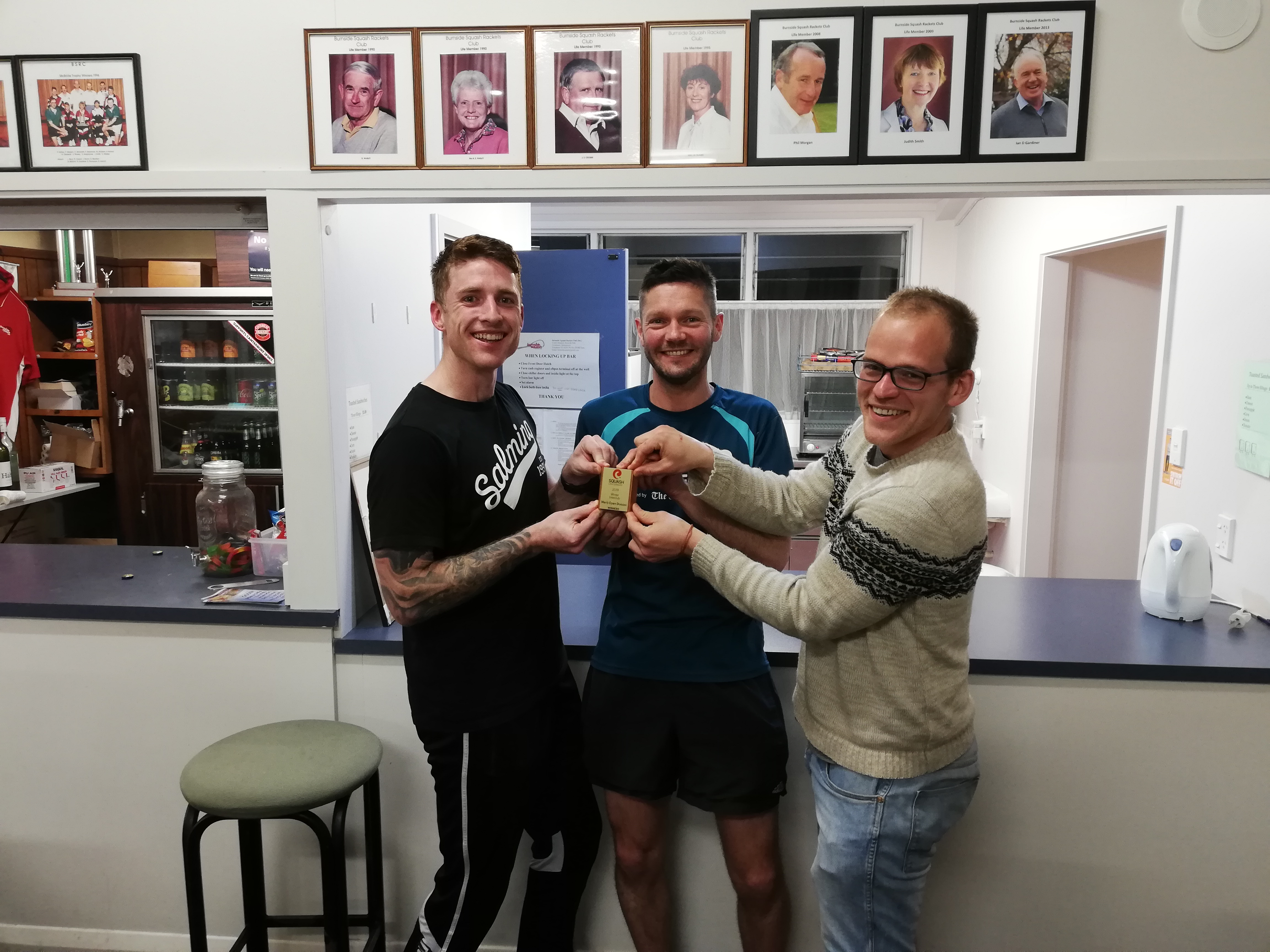