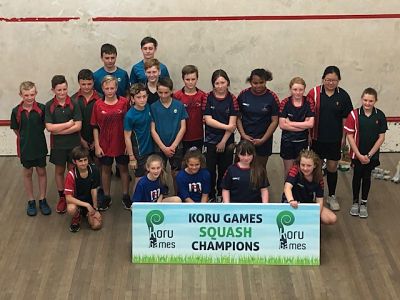 The focus of the games is on individual skill development and sports adapt their competition formats to support this. Many of the players in the squash competition where new to squash and giving it a go. It was great to see how much the players developed and strengthened their game over the 3 days of competition.

The girl’s competition saw great improvement in each players game, especially the girls entered from Burnham School.  A very exciting play off for 3rd & 4th position saw each team win 1 match, and for the only time during the tournament each team also scored the same points Burnham 1 33 to 37 Burnham 2 and 38 / 34 so a 71/71 tie awarding a Bronze tie for 3rd place well done girls every point counts.

1st & 2nd play off was a repeat of the girl’s final from 2018 with St Martins School v Middleton Grange playing off.  St Martins proving too strong winning 40/28 and 40/13, who will be in the final next year!

The boy’s competition was very competitive, clearly many of the boys had encouraged their parents to provide an opportunity for pre-games training and the players were reward with some great games.

3rd & 4th play off was between Ladbrook’s & Lemonwood Schools.  Ladbrook’s won the first game 40/33, number 1 from Ladbrook’s Jack Macdonald fighting on after a foot injury doing well to win 27 points against a strong Lemonwood opponent final score 27/40 with Lemonwood winning on points count back 73/67.

Check out the Koru games for 2020! It’s a fantastic tournament and if your child’s school is not currently entering teams you should ask why!!! http://www.korugames.nz/