New Zealand held their heads high once again after coming away with a win against our rivals the Aussies.

A few weeks back the Trans Tasmin Secondary schools competition was played, this tournament involved teams of 20 students (5 junior girls, 5 junior boys, 5 senior girls, 5 senior boys) from New Zealand, New South Wales, and Queensland coming together for 10 matches over the span of 5 days. Canterbury represented very well having four students named in the team and a further two being named as non-travelling reserves. Petra Curd-McCullough playing number 2 in the junior girls team, Caitlin Millard playing number 3 in the junior girls team, Leonie Marshal non-travelling reserve for the senior girls team, Tom Marshal playing number 3 for the junior boys team, Ryan Ko playing number 4 in the junior boys team, and Charlie Prince non travelling reserve for the junior boys team. The week was filled with a ton of excitement, nerves and lots of squash. Everyone played two games a day, the first three days being singles games, where we each played three of the top players from the two different Australian teams, the Thursday being played for the doubles trophy, and the final day being the actual test match where Australia fielded their combined team. 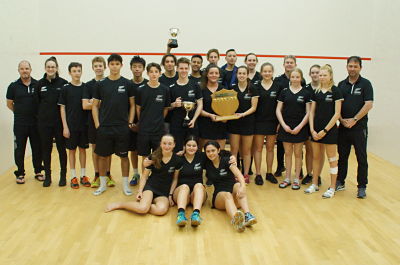 Along with the competition we got to know our fellow kiwis well and did lots of team bonding. It was an amazing experience and we were all grateful for the opportunity to be named in the New Zealand Team and represent our nation.

We would like to say a big thank you for all the support we had along the way.