Last week, the teams were split between Burnside and Linwood and tonight, they are looking forward to some heated semi-finals being played at Burnside Squash Club.

It was a strong performance by the Hoon Hay ladies tonight playing at Linwood. The number three seeds had a battle of the night, with Cheree Bray (FB) coming up against Nadia Karati (HH). An intense five setter, with all extremely close games. Cheree took the first set 15-13 and the third set 16-14. The other sets were all equally as close, coming to a nail biter of a fifth set, with Nadia taking it out 18 - 16. Second on the line up, Michelle Dittfort (FB) played Kelsi Carrick (HH) at the number 2 position. Kelsi held her composure to take the match in 3. The number one seeds had a tricky match, with Football's Sarah Blair playing Hoon Hay's Kayti Carrick. With both ladies enjoying a hard and fast paced game, both ladies had to work hard for their points. Despite this, Kayti played a strong game against Sarah, to take the match in 3. Final match score: Hoon Hay 9 - 2

Linwood's Jamie Leach put good pressure on the resident A2 of Division 1, Grace Hymers (CHCH), in the number one match. Jamie kept herself in the game, but couldn't quite push it far enough, with Grace taking the match in 3. When there's a battle between friendly rivals Jess Wilson (Linwood) and Liza Tonkin (CHCH), spectators are never let down. Both ladies being known for their quick wit on and off the court, Jess and Liza always put on a good show. Unfortunately, Jess didn't treat Liza to her favoured five setter, taking the match in a very well-fought four sets. The number three seeds tonight were Robyn Flynn (Linwood) and Diane McCoy (CHCH). Di went on court with a mission and played a very solid game against Robyn, taking the win for Christchurch in 3. Final match score: Christchurch: 7 - 3 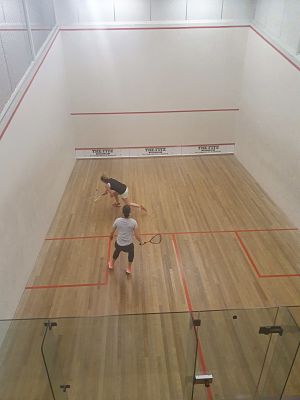 The games were kicked off with the number three seeds, Heather White (Burnside) and Jo Elmwood (CHCH). Heather started with a bang and got the first 2 sets relatively quickly, but Jo pulled it back to take the 3rd set 16-14. This momentum continued with a much closer 4th set, but Heather managed to finish the match off in 4. The number one player’s, Bronwyn Smales (BS) and Katie Douglas (CHCH), had a very consistent match, with all games being won 15-9. The two styles made for an interesting matchup, but in the end, Katie took the match for Christchurch. With one match each the number twos took to the court for the decider. Lee-Ann Blanken (BS) came against Jemma Erceg (CHCH). A couple of weeks off for the uni break didn't slow Jemma down, as she controlled the game and finished the match in three, taking the win for Christchurch 2. Final match score: CHCH 2 7-3.

The number threes started the night off for Burnside 1 v Linwood, with Kelly Sullivan playing Grace Allen. Kelly played a strong attacking game, dominating the first two sets. Grace pulled back to make a close final set, however, Kelly took the first win for Burnside in 3.  Next up were the Kate Fox (BS) and Molly Allen (FB) at the number two spots. Molly did some great retrieving and volley, forcing Kate out of the middle of the court, however, Kate held it strong to take the match in 3. The final battle of the night was between number one seeds Susan Wasley (BS) and Caitlin Millard (FB). With these two players having never played against each other before, both ladies were ready for a tough battle. Sue, determined not to let this upcoming junior get the best of her, played a hard and fast game, moving Caitlin to all four corners of the court. Caitlin fought back well, but couldn't pull it off for Football, with Sue taking the match in three. Final match score: Burnside: 9 - 0.