Last Tuesday the Women’s Division 1 all convened at Squash HQ. This week’s final round robin games will be played in two venues; Linwood and Burnside. Spotted! in the photos: Moriya Karati vs Fi Stewart and Heather White vs Michelle Dittfort 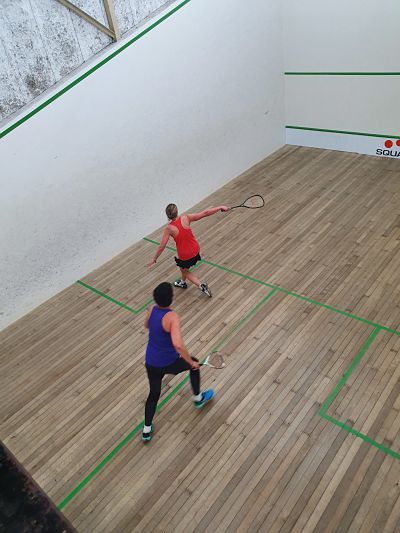 First to head onto the court tonight were the number 1 seeds, Sarah Blair (Football) and Chwee Yeo (Burnside). With extremely different styles this was always going to be a tricky match up, with Sarah playing an assertive power game, while Chwee has some incredible short shots that can come from anywhere the court. With the first two sets both only having two points in it, it was a great nail bitter, however, Sarah managed to secure the first win for Football. Next up were the number 2 seeds, Petra Curd-McCullough (Football) against Burnside's Yi-Lin Yoong. Petra was still on a buzz after having a successful tournament in the secondary school Trans-Tasman event, and was in her stride, taking the match in three. The final match of the night was played between number 3s Michelle Ditfort (Football) and Heather White (Burnside). With both ladies pulling out some epic retrieving, it felt like a marathon battle! While Heather took the first set, Michelle took the match in four finalising the win for Football 1. Final match score: Football 1, 9 -1. 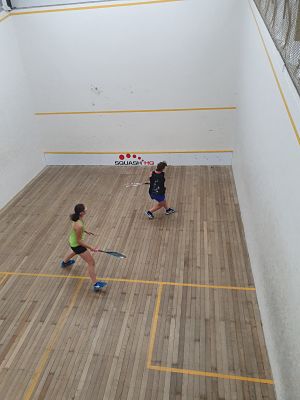 The number two seeds started the night off between Hoon Hay 1 and Christchurch 2. Nadia Karati (HH) played Christchurch's Jo Ellwood. Jo took an early lead, snatching the first set, but Nadia wasn't going to take that lightly, firing back up to take the match in four. It was set to be a bit confusing for the marker tonight, with Kayti Carrick (HH) facing up to Katie Douglas (CHCH). The first two sets were neck-and-neck close; Carrick taking the first 15-13, while Douglas took the second 15-13! Carrick held her ground with a more comfortable third set, and while the fourth initially looked like it would be similar, Douglas fought hard to close a nearly 10-point lead! However, Carrick kept her cool to finish the match. The final match was played between number 3s Moriya Karati (HH) and Fiona Stewart (CHCH). The first set was one of the longest sets of the round, going to 22-20 in Moriya's favour! Despite this lengthy first set, both players kept battling it out very competitively, however Moriya finished the match in 3. Final match score: Hoon Hay 9 - 2.

The number 1 seeds Grace Hymers (CHCH) and Freddie Walker (Football) played for the first match of the night between Christchurch 1 and Football 2. Grace was on form after taking out the title in the Christchurch Open on the weekend (Well Done!), and worked out Freddie's cunning game play early on, taking the win in three. Christchurch's Claire Allred played Football's Caitlin Millard in the number two spot. Like fellow CGHS student Petra, Caitlin had also just come back from a successful week at the secondary school Trans-Tasman tournament. Claire fought hard but couldn't quite get there against this youngster. The final match of the night was played between Wendy Dunlop (CHCH) and Ella Knutson (FB). Ella played a lovely attacking game and kept Wendy moving around the court. This helped her take the win for Football in 3. Final match score: Football 2 6 - 3.

Number 2 seeds Jess Wilson (Linwood) and Kate Fox (Burnside) set the ball rolling for these two teams tonight. Jess played some cunning "masters boasts" catching Kate off-guard quite a few times! However, Kate managed to get some good length and keep Jess in the back, putting her in some trouble. Kate took the first match 3 - 0. The number 3s went on the court next, with Linwood's Robyn Flynn playing Burnside's Kelly Sullivan. Kelly seemed to be back in her groove after her Mediterranean holiday and played a pretty tidy game against Robyn. While Robyn kept fighting and making some incredible retrievals, Kelly took the match in 3. The final match was between Linwood's Alicia Rangi and Burnside's Sue Wasley. With both players having watched each other play in men’s interclub the night before, these ladies looked like they had their tactics all picked out before the match started! A closely matched battle with both ladies enjoying a similar game it was always going to be a tough one. However, Sue managed to secure the win for Burnside. Final match score: Burnside 9 - 0.