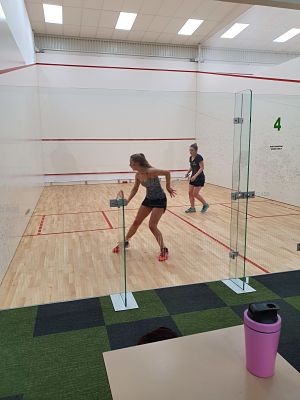 This battle between club mates resulted in some of the closest matches of the night, but Football 1 came away the winners of this clash. The number one match between Ella Knutson (2) and Sarah Blair (1) had a marathon first set, with Sarah taking the lead 21-19! Both ladies kept it going strong with Knutson managing to snatch the third set, however it wasn't quite enough to stop Blair, who took the match in four sets. The second seed match was played between Molly Allen (2) and Mary Turnbull (1). Experience came out on top, with Mary's smart play taking the match in three.  Grace Allen (2) was able to pull out a win for her team tonight against Michelle Ditforf (1). All three games were extremely close, but Grace was able to keep her composure to take the match in three sets. Final match score: Football 1, 6 - 4.

The number two seeds started the night off for these two teams. Liza Tonkin (CHCH) came against Kelsi Carrick (Hoon Hay). Kelsi kept to her usual form and played some killer short shots to take the match in three. Christchurch's number one seed Grace Hymers came up against Canterbury Senior teammate Kayti Carrick. While Kayti tried to keep Grace out of the match with some great length rallies, Grace came through to take the match in three. With the score all tied up, the number three seeds went out for the decider. Christchurch's Wendy Dunlop played Hoon Hay's Moriya Karati. While Wendy pushed Moirya and managed to take the 3rd set, it wasn't quite enough to secure the win. Moirya won the match in four. Final match score: Hoon Hay 6 - 4.

The number 2s took to the court first with Fiona Stewart (CHCH) facing up against Linwood's Jess Wilson. As Jess and Fi both play a similar game there were a lot of tight rallies, particularly around the front corners. However, Jess took the match in three to start the night off. Christchurch came back with a roar with the number three seeds heading on next. Christchurch's Jo Ellwood played Linwood's Robyn Flynn. Despite Robyn's great retrieval skills, Jo took the win for Christchurch, evening the score with a 3 - 0 win. The decider now fell to the number one seeds Katie Douglas (CHCH) and Jamie Leach (Linwood). Three extremely close sets finished the night for these two teams. Katie took the win in 3. Final match score: Christchurch 2: 6 - 0.

It was Burnside 1's night tonight with a dominating 9 nil win against club mates Burnside 2. Yi-Lin Yoong (2) played Kate Fox (1) first up in the number two seed match. Kate had to work hard to keep in front of Yi-Lin, as she was played some very tricky angles tonight. The length game paid off, with Fox taking the match in 3. Next up was the number 1 seeds, Chwee Yeo (2) and Sue Wasley (1). Chwee, known for her excellent short game, worked Sue hard, but Sue played to her strengths and played some great aggressive length to take the match. The final match was played between Lee-Ann Blanken (2) and Judy Smith (1). Judy played her usual calm and collected game to take the final match. Final match score: Burnside 1: 9 - 0. 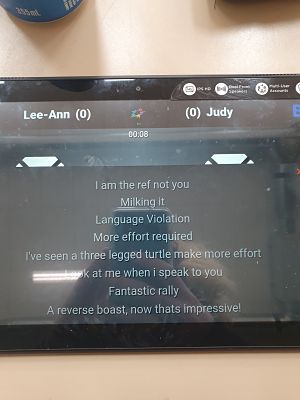 ‘If you haven't checked out the different comments that you can give the players through the scoring system that they use at the Christchurch club, it is highly amusing. My personal favourite would have to be "I've seen a three-legged turtle make more effort"! A pretty funny way to give your team mates some slack, when they're not expecting it!’- Kate Fox

Featured in the pictures this week are Katie Douglas vs Jamie Leach, and Ella Knutson vs Sarah Blair.