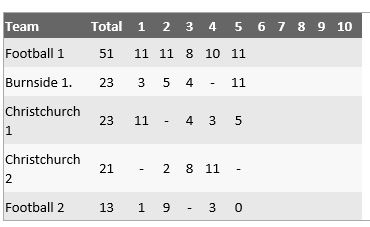 Week 5 of the Christchurch Men's Interclub was again at Football club and as the draw worked out the Football teams got to face it out again whilst Burnside 1 subbed in for Christchurch 2 this week.  With the Winter Interclub at its halfway point here's a look at the points table.

This was a quality match up to watch as these two sides are evenly matched and with both teams standing down their No.1's it meant the matches stayed very even. Dylan Budge was happy to get past the trickery of Tim Preston who seems to be finding his feet slightly at this late part of the season. Budge who is partial to a brain fade or two allowed Preston into the match which is a dangerous move against the craft of Preston. Unfortunately for Preston his lack of match time let him down as Budge took the match in 5. A very similar match took place between Nathan Briggs and Graeme Dill-Russell. Dill-Russell has been playing very well this year, causing a lot of trouble against players he normally wouldn't, but Briggs was up to the task as he battled through his ups and downs to take another win in 5. Brandon Mchaffie returning from a few months sabbatical overseas won in 4 against the hard-hitting Simon Kidgell it was a good 3-0 victory for Burnside one as they took full points for the night.

The inclusion of the 'Terminator' this week in the Football 1 team meant that proceedings were quite one sided in the second round of the Football derby. As a result, there is plenty of chatter that after Football's shock loss to Squashways during the Autumn Interclub that they are wanting the Winter title at any cost. Their no.1 call in Thomas Jordaan didn't disappoint this week either polishing off PJ Theron in fine style playing some accurate yet aggressive squash to the front of the court. Theron could cover Jordaan's impressive short game and went down 3-0. Jordaan will also now be the No.2 in the team as he's just gone ahead of Cumpstone on points after beating him at the Christchurch Open in the weekend. The Terminator and Cumpstone also notched up 3-0 victories, showing the rest of the teams they are the team to beat for the winter title this year.

At this stage of course by looking at the points table it would be hard for Football 1 to not take the title and with three team within 2pts of each other it could be interested to see who will be the runners up. Do you think any of the teams could beat Football 1?