It was a fantastic showing of Juniors from both the North and South Island with some stunning matches displayed throughout the tournament. It was also the first tournament hosted by Christchurch Squash Club in their brand-new facility featuring 8 courts. 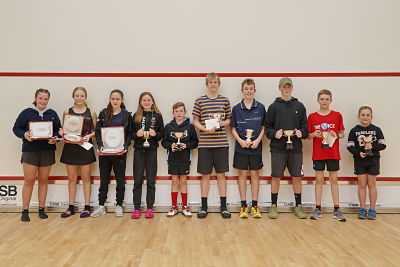 In the Girls U19 final, Winona-Jo Joyce from Havelock North, who won the U19 Girls title, looked comfortable in her final match winning both 3-0 against Caitlin Evison and Kayla Harvey in a 3-person draw. Henry Aitken from Waimea, showing a dominant display, took the U19 Boys title beating Campbell Maitland 3-0 in the final. He has shown great tenacity throughout the tournament against his other opponents.

It was certainly a nail-biting final for the U17 and U15 Boys and Girls. The U17 matches featured Jack Conder against Paul Moran who won 3-1 in an exciting match-up. Martha Toghill and Leonie Marshall played for first place after comfortably beating their earlier opponents in a 6-person draw and Martha came up on top in a 3-2 brilliant final, there were definitely a lot of cheers from both sides.

The U15 Boys match saw Tom Marshall beating Ryan Ko 3-1 and Petra Curd-McCullough came up on top against Moriya Karati 3-0 in a 4-person round robin for U15 Girls.

Aria Bannister (U13 Girls), Casey Ellery (U11 Girls), Riley McCracken (U13 Boys), and Zac Laing (U11) all took their titles in their respective divisions, winning their final matches 3-0.

Well done to all the Juniors who participated in this tournament.

Check out the photos from the tournament here 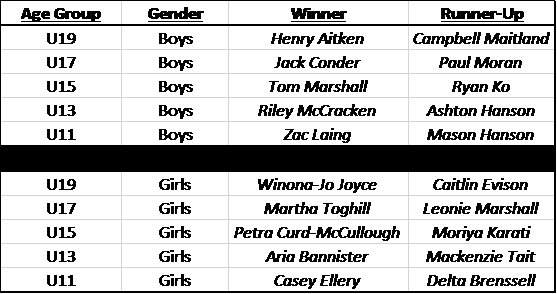