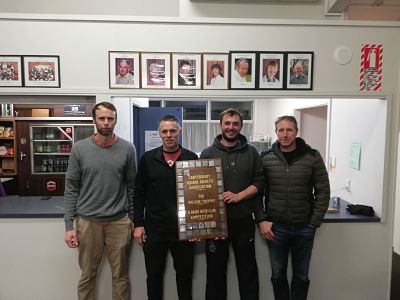 Last week was the finals week of Heller’s Autumn Men’s Open Squash Interclub and the winners are in and the wooden spoon has been decided. The night kicked off with a number of keen individuals taking to the court pre-7pm at warm up with some three quarter court, a first for the Open but maybe not a last. As the matches kicked into gear it would be fair to say that everyone was in a good mood and there were a number of supporters down (mainly supporting Squashways) to add to the atmosphere. Here’s a look at how the finals all played out.

Well I’ve been talking up Football 1 all season and then this happens.... Squashways takes the trophy. You might call it an upset but really when you can ring Oliver Johnston and have Jason Oxenham has your No.2 Squashways quickly become the favourites. Johnston and Adam Odering took to the court very quickly after arriving at the courts and started the match with possibly a 100+ shot rally. Whilst the first rally should have benefited Odering the fitter of the two, Johnston showed his experience and keeps going like a steam train. Every time Odering got close, Johnston would just change it up a gear, hitting the ball harder and putting extra pressure on his opponent. In the end Johnston rolled over Odering in 3 sets as if he had got caught on the train track. Next were Matt Smith and Jason Oxenham which was a very close encounter as the match was close all the way through but at 1-1, 9-5 up Smith had a chance to give Football a fighting chance. Unfortunately the pressure soon was felt as he lost the next few points and the set 12-10. Oxenham showed his class to win in 4 and give his team the title. Football 1 had the last laugh though as Jason Cumpstone upset Johnnie Honeyman in 5 sets. Well done Squashways on the win and great way to end things for Paul Growcott at the club where he has helped so many people and juniors in particular become better squash players and people on a whole.

You might be asking “what happened here?” but I can assure you that it was down to the fact that Christchurch 1 had suffered a number of injuries and absentees and the Midlands crew were so distraught at the thought of not playing for Squashways that they couldn’t front up for their last match anyway. This being said it would surprise me if Paddy and Lee were in another one of their famous quarrels again and wouldn’t get into the car with each other.

It wasn’t Football’s night this week as Christchurch 2 got the win over Football 2. Williams and Hollows both won rather one sided matches which meant Gardner and Petelo had the final say as to who came 5th. Petelo started strong as Gardner quickly was looking down the barrel of being bageled in the first at 8-0 down. From there though things looked up for Gardner as he found form, the opposite was the case for Petelo as he suffered an injury, hindering his movement. Only the adrenaline kept him going allowing him to take the fourth but Gardner soon put an end to any hopes as he bageled Petelo in the 5th set.

Well luck to Burnside 1 for getting the wooden spoon this round. Scott Gardiner led the team well and has been a great role model to the juniors in the team. I think I speak for everyone when I say that Ryan Ko and Nathan Briggs will easily be A-graders if not A1’s if they want to be. Unfortunately it was not their day as Burnside 2 pulled a win out like a rabbit out of a hat. Even though their No.1 Lucas Rosa left half way through the season to blackmail Jacinda into converting the whole country into vegan, managed to pick up the pieces and win their final (and most important) match. At the end of it all though it was great to see both teams hop on court to play more squash, namely doubles. Unlucky Burnside 1, maybe next round will be kinder on you.

Well that’s the end of the Heller’s Autumn Men’s Open Squash Interclub. Been great playing and writing about the teams. If you have any suggestions for nicknames for players then comment below. See you when the winter interclub rolls around.