The South Island Age Group Teams Event will take place in Timaru the 20th – 22nd September 2019. Eight teams compete (U11, U13, U15 & U17 Boy’s and Girl’s), against the other South Island Districts for the overall trophy. 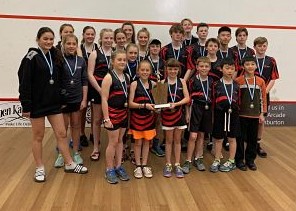 There was plenty of excitement and laughter around as 24 Canterbury juniors settled into the lodge at Ashburton Holiday Park on the evening of the Friday 20th September. The lodge seemed to be brand new and having a huge kitchen and lounge area we all felt Squash Canterbury had done us proud with accommodation.

Saturday dawned bright and sunny, which was to be the theme for the rest of the day. The kids were keen to see the courts, have a warmup and size up the other teams before play got underway against Midlands, Southland and Otago. The Canterbury results from the two rounds of play on Saturday were very strong, with only five matches lost and most of our age groups winning all three matches.By the close of play Saturday, Canterbury had all but won 5 of the 8 round robins, but the GU13, GU11 and BU17 still had a lot of work to do.

The GU13 situation was similar except that their Southland opponents for the Sunday had also picked up six wins on the Saturday so the Sunday was set for a classic showdown among traditional rivals in the women’s game.

The BU17 had been well beaten by Southland on Saturday and with the Southland boys dominant, Canterbury Vs Midlands was to be effectively a play off for second and third.

On Saturday night Ashburton put on a pizza dinner and quiz night at the club which was well appreciated before wrangling the kids toward bedtime after a big day for everyone.

Sunday first up was the featured GU13 match. Grace Rhodes led off strongly with a well competed 3-0 win. Carly Craig had an excellent matchup but proved too strong in a close 3-1 win. Saya Stratton was then playing for a Canterbury clean sweep had another competitive match winning 13/11, 11/5, 11/6.

The GU11 match was all about bragging rights as the Midlands team of boys were not being counted toward the overall results, but fresh from success on Saturday the Canterbury girls were determined to do well. Lucy WiRepa started off strongly with a dominant 3-0 victory. Casey Ellery had a big battle but came out ahead 11/4, 18/20, 11/8, 11/8. That setup Ivana Preston’s match again playing for a clean sweep, but it was not to be with Kees winning the match of the day 7/11, 11/5, 7/11, 11/5, 11/5.

The BU17 match vs Midlands went to Canterbury 3-0, so a creditable second place behind worthy overall winners Southland.

The overall result was 144 great squash matches, well played and with plenty of reasons to be proud of the efforts and behavior of players from all districts. A very worthwhile event which I’m sure will be a great motivation to all the juniors to continue training and improving. Overall district ranking order was Canterbury, Southland, Midlands and Otago.

*Alysa replaced Lily Collier; Lily is unable to play due to an injury.

To all the players on your performance and securing the overall trophy, we are so very proud of you and a big shout also to Chey WiRepa (U11), Anastasia Lim, Poppy Sargentina & Georgie van Herel (U15) who filled in for the other districts.

It’s great to see depth of Canterbury Juniors coming through.

Thank you to Squash Midlands for hosting a great tournament and making all the players and parents feel so welcome.

A massive big thank you to Helen Curd-McCullough for all her hard work behind the scenes in pulling everything together and the parents who stepped up as team managers and parent helpers, you all did awesome job. Thank you; Tim Preston, Rick Stratton, Jo Clarke, Daniel Lim, Ian Pattinson & Julie Gardiner

Thank you, Tim Preston, for your awesome write.

A final thanks to New Zealand Racing Board for their financial support.

For an outline of our representative program and the selection for inclusion in the Squash Canterbury SIAG team please refer to our Representative Team booklet. This booklet is a 'living' document and will be published annually with updated policies, guidelines, plans & procedures.