It is that time of year again when we put the call out to clubs and members for nominations to be put forward for election to the Squash Canterbury Board at the Annual General Meeting (details of which are still being finalised but it shaping up to be in the last week of May).

The Squash Canterbury Board governs the direction of squash in our District and is instrumental in advocating for the needs and views of the District to the national governing body, Squash New Zealand. The time commitment is one meeting per month, which can be attended in person or via Zoom. There may also be times in between meetings where your input is requested on different matters, however this is predominantly done via email.

At the upcoming AGM there will be four seats up for election - two through resignations from current Board members and two through the requirement for current Board members to stand down at the end of their two-year term and be re-elected if they wish to do so. Any member of a club affiliated to Squash Canterbury can be nominated by another member of a club affiliated to Squash Canterbury. We encourage you to speak directly to any individuals who you think would be valuable to have on the Board, and champion them to consider being nominated and standing for election.

If you are interested in obtaining the Board Nomination Form, or have any questions or would like to discuss the positions further, please contact info@squashcanterbury.co.nz or 0275337348. 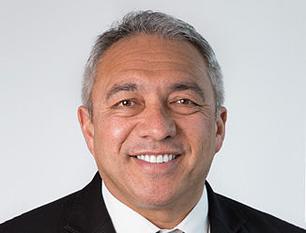 On behalf of the Board, staff and wider membership, Squash Canterbury would like to express its deepest condolences to the family and friends of Mike Beresford after his passing, as well as to the Christchurch Squash Club and its members.

Mike was a beloved figure in the squash community, dedicating endless hours in a variety of volunteer positions - all with a smile on his face and a passion for not only the sport but also its participants.

Mike's legacy will continue to live on for generations to come, and it was more than a privilege to have him involved in the squash family.

Check out our range of FREE Girls April School Holiday Programmes all around Christchurch and Rangiora. They are all about having fun and meeting new friends, so register now at https://www.squashcanterbury.co.nz/registration/index.cfm 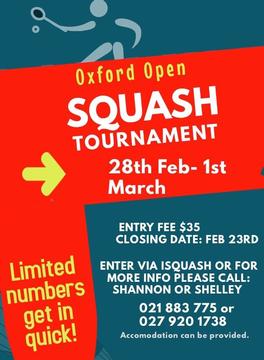 The Squash season is nearly back and for all the restless souls out there the OXFORD CLUB is hosting their OPEN in February this year. The club has undergone many repairs since the earthquakes and is now looking in tip-top shape and is hosting this open with the hope of making their club look even better.

Oxford is a welcoming and tidy 2 court complex 30min outside of Christchurch that includes fascinating views of the Canterbury plains along the way and has the famous Sheffield pie shop just around the corner (I've been told these pies are to die for) as a great food stop.

The Oxford Open will be a great tournament for everyone and if you want to sign up then go to https://www.squash.org.nz 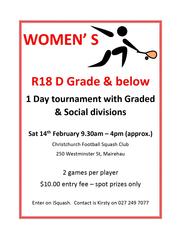 Here's another new initiative coming out of Squash Canterbury - the WOMENS R18 D GRADE & BELOW SERIES. Its a great opportunity for women who wants to take up squash or get playing more, to play a tournament where everyone will be of similar ability.

This is the first of 4 tournaments in the series taking place at FOOTBALL CLUB and run by Kirsty Whiteside who is a D1 herself.